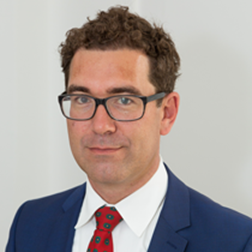 Dirk Buschle is Deputy Director of the Energy Community Secretariat since 2011 and has led its legal unit since 2007. In this position, he is in charge of ensuring implementation of European energy law in the countries of the Energy Community. He is also responsible for dispute resolution and negotiations and acts as mediator in high-profile investor-state conflicts in the energy sector. Among others, he mediated the dispute between the Ukrainian government and renewable energy investors settled in 2020.

He is also Professor and Chairholder of the European Energy Policy and Climate Chair at the College of Europe in Bruges. Dirk Buschle graduated from Constance University, and earned his Ph.D. at St. Gallen University. He has widely published in different areas of European policy and law, and has lectured at Universities of Reykjavik, Constance and St. Gallen as visiting professor. Prior to his current position, Dirk Buschle was Head of Cabinet of the President of the Court of Justice of the European Free Trade Association (EFTA) in Luxembourg.