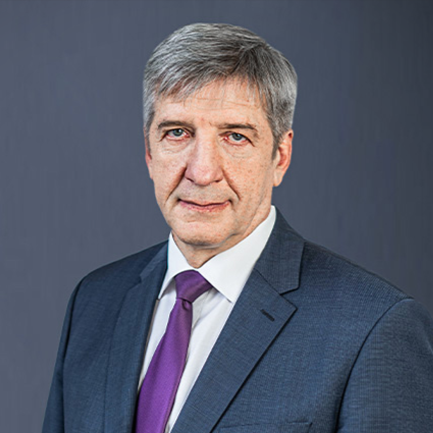 Mr. Vladzimir Astapenka is the Deputy Head of the National Crisis Management of Belarus and since September 2022 also occupies the position of Deputy Representative for Foreign Affairs of the United Transitional Cabinet of Belarus. As of October 2022, Mr Astapenko heads the Mission for Democratic Belarus in Brussels, the first of its kind representative office for the Belarusian opposition.

Vladzimir began his career as the third secretary of the Ministry of Foreign Affairs of the Belarusian Soviet Socialist Republic. He served as Vice Minister for Foreign Affairs of the Republic of Belarus and worked at a number of embassies, namely in the Kingdom of Belgium and in the Netherlands. In 2018 Vladzimir was appointed as Ambassador Extraordinary and Plenipotentiary of the Republic of Belarus to the Argentine Republic. Vladzimir resigned his post in 2020 in protest of the rise in power of Alexander Lukashenko, saying he believes in a better future for Belarus.

Vladzimir graduated with a Ph.D. and has long held the positions of Vice Rector and Head of the Chair of International Private and European Law at the Belarusian State University. He has been the author of more than fifty scientific and academic publications in the sphere of International Law, European Law, International Relations, and Higher Education.

In his personal life, Vladzimir is married with one daughter and two sons.