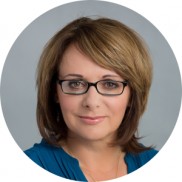 Adriana Krnáčová has been the mayor of Prague since November 2014. A businesswoman by background, Krnáčová is the first woman to serve in this position. Prior to becoming mayor of Prague, she served as the deputy interior minister for public administration and legislation at the Czech Ministry of the Interior. From 2009 to 2014 she was executive and owner of strategic marketing, facilitation and PR at BleuOceanSolutions. Krnáčová was head of the Czech branch of Transparency International from 2001 to 2007. She also serves on a number of boards including Veřejnost proti korupci (Community against corruption) since 2012 and Zdravé Česko (Healthy Czechia) since 2013. Krnacova speaks Czech, Slovak, German, Hungarian, English, Russian and Italian. She received her MBA from DePaul University in Chicago.