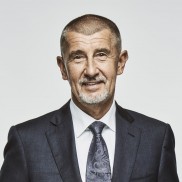 Prime Minister of the Czech Republic

Andrej Babiš is Prime Minister of the Czech Republic from 6 December 2017. From 24 January 2018 in resignation, on 6 June 2018, he was reappointed and charged with forming new Government.

In the autumn of 2011, the Action for Dissatisfied Citizens has been formed and in May 2013, it was registered as a political movement that can take part in democratic parliamentary elections. It received nearly a million votes in the early election in 2013, which was the highest number for a new political entity in the history of the Czech Republic. The next, regular election to the House of Deputies in 2017 was won by ANO with more than 1.5 million votes. In 2016, Andrej Babiš was awarded as the Minister of Finance of the Year for the area of developing European economies.

He graduated from the University of Economics in Bratislava and before entering political career he founded Agrofert, back in 1993. Agrofert is currently the largest Czech agricultural, food and chemical holding. He speaks English, French, German and Russian.