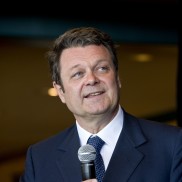 As Executive Director of the GSA, Mr. des Dorides sets the vision of the Agency and ensures that the GSA is well placed to accomplish its mission of supporting the effective operation, maintenance and security of the Europe’s satellite navigation systems, while guaranteeing optimal service levels and developing applications and services that ensure the satellites benefit end users.

Mr des Dorides has almost three decades of experience managing space service focussed teams. Most recently, he had key management responsibilities at the European Commission and was responsible for the definition of the Galileo/EGNOS exploitation phase and the EGNOS operational phase.

Before joining the Commission, Mr. des Dorides led the Concession Department at the European GNSS Supervisory Authority and served as Chief Negotiator of the Galileo Public-Private-Partnership/Concession contract at the Galileo Joint Undertaking.

Mr des Dorides‘ career has focussed on program management and operations of advanced satellite systems. As Director of Programs and Engineering at ENAV the Italian air navigation service provider, he was responsible for updating the technology of Italian airports and Area Control Centres. Prior to that he held several management positions in the aerospace private sector including Head of advanced telecommunication programs and Program Manager for major satellite telecommunication projects at Alenia Spazio. Within these organisations he managed a significant number of projects in the areas of contracts, procurement and service engineering.

Mr. des Dorides holds a degree in engineering from the University of Rome and an M.B.A. from CUOA, Vicenza, Italy, complemented by his studies at the International Space University in Toulouse.