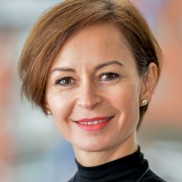 Before joining the Commission in 2009, Dana was a journalist and editor for various media as well as working in academia. She was the Editor of European Voice, a weekly newspaper focusing on EU matters belonging to The Economist Group, between 2004 and 2009, having starting to work for the newspaper as Deputy Editor in 2002. Before that she spent two years as deputy editor of Brussels-based news service EUobserver.com.

In parallel, Dana worked, between 1998 and 2008, as political commentator for three Romanian TV stations – Antena 1, ProTV and Realitatea TV. She started her career in journalism in Bucharest, Romania, at TV5-TV Sigma in 1992, and moved on to join Antena 1 as Editor-in-Chief of the news department in 1996.

In 1998-2001 Dana was also a teaching assistant at the College of Europe in Bruges, following her studies there.

Dana studied journalism and communication at the University of Bucharest. She then obtained two masters degrees, from the Institut Européen des Hautes Etudes Internationales (Nice) and the College of Europe (Bruges).