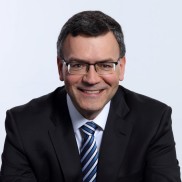 Dr Herrmann studied law at the Ludwig Maximilian University of Munich, the Goethe University in Frankfurt, and at the University of Bonn. Dr Herrmann joined the Christian Social Union (CSU) in Bavaria in 1998. He began his political career in 1999 as Managing Director of the CSU Local Association in Freising and was first elected to the Bavarian state parliament in 2008. From December 2011 to October 2013, he served as Deputy Chairman of the Committee on Local Issues and Internal Security. He was re-elected in State elections in 2013 and was then elected chairman of the Committee on Local Affairs, Homeland Security, and Sport. In 2018 he was appointed head of the Bavarian State Chancellery and Minister of State for Federal Affairs and after his re-election in 2018, the responsibilities of the ministerial office have been extended to European Affairs and the Media.