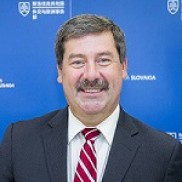 Ambassador František Ružička was the Chef de Cabinet to the President of the 72nd Session of the UN General Assembly (2017-2018).

Ambassador Ružička was Permanent Representative of Slovakia to the United Nations from September 2012 to August 2017, during which time he served as Chair of the Fifth Committee for the 69th Session of the General Assembly, co-chair of the Ad hoc Working Group on Revitalization (68th Session), member of Intergovernmental Committee of Experts on Sustainable Development Financing (68th Session) and Member of the Secretary General Independent Panel to Asses and Enhance Effectiveness of the UN-Habitat (May-September 2017).

From October 2004 until his appointment as Permanent Representative to the UN, he was Director General of the European Affairs Section at the Ministry of Foreign Affairs in Bratislava, except for the periods August 2011 to May 2012, when he was in charge of the United Nations Department, and May 2005 to February 2010, when he served as Ambassador to Poland. Between September 2003 and April 2005, he was Director of the Department for Internal Affairs and Institutions of the European Union. Alternating foreign diplomatic postings with service at headquarters. His extensive career spans the period when his country was part of the former Czech and Slovak Federal Republic.

He was Deputy Chief of Mission at Slovakia’s embassy in Prague, Czech Republic, from August 1999 to August 2003; Director of the First Territorial Department (North America and Western Europe) at the Foreign Ministry from December 1998 to July 1999; Deputy Director General of the Political Section, from January to November 1998; Director of the Department of International Economic Cooperation from October 1996 to December 1997; and Deputy Director of the Office of the State Secretary from August to September 1996. Ambassador Ružička represented Slovakia at many high-level summits of the European Union (1999-2012), participated at the negotiations of the Lisbon Treaty. While posted in Washington D.C. took part in regular talks of the Bretton-Woods institutions (1993-1996). Prior to a brief earlier stint in the Department of Economic Cooperation, from May to August 1996, Mr. Ružička was First Secretary for Economics at Slovakia’s Embassy in Washington, D.C., from January 1993 to May 1996; First Secretary (Press), Embassy of the Czech and Slovak Federal Republic in the United States, from July to December 1992; and Deputy Director of the Press Department at the Foreign Ministry, from January to July 1992.

He worked in the Press Department of the Ministry of Foreign Affairs in Prague from July 1990 to December 1991, having had his first overseas posting as Third Secretary (Press) in Madrid, and after joining the Ministry’s Press Department as a Desk Officer in July 1989.

He graduated from Charles University in Prague in 1991, and from the Moscow Institute for International Relations in 1989. He speaks English, Russian, Polish, passive Spanish and French.

He is author of several publications on Slovak foreign policy, EU integration and author of the book “European Diplomacy” (2012) on the role, work and policies of the European External Action Service.