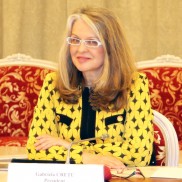 Gabriela Crețu holds a PhD degree on the Epistemology of social sciences from the first Romanian university – the „Al. I. Cuza“ University of Iași – where she studied philosophy and history. Before being elected as a member of the parliament, she taught social sciences and economics. For her professional results, she was awarded the Romanian national order for accomplishments in education.

Creţu has published several books and numerous studies and articles in social sciences, economics, political science, geopolitics, feminism, and epistemology. During her political activity she has been involved in global, international and European projects and campaigns. Creţu speaks English, Spanish and French and understands Portuguese and Italian.