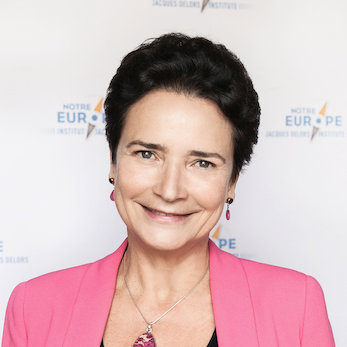 Geneviève Pons was in charge of environmental and climate matters in Mr. Jacques Delors’ Cabinet during his last two mandates as  President of the European Commission (EC) (1991-1995). She thereafter held several management positions at the EC. In 2013,  Geneviève was appointed Director of the ILO’s Legal Service, and in June of 2015 as Director of the WWF’s European Office. From  November 2017 until December 2019, she headed Jacques Delors Institute’s Brussels Office. In January 2020, she was appointed as the head of Europe Jacques Delors (AISBL), the latest in the family of think tanks carrying on Jacques Delors’ European vision. She is a  graduate of Sciences-Po Paris, the Sorbonne, and ENA.

Genevieve is considered by Politico as one of the most influential women in Brussels, notably in the field of environment. She is an active member of Ocean Unite and of the Antarctica2020 coalition, which aims to protect the vast marine areas around Antarctica.

Since 2019, alongside Pascal Lamy and Pierre Leturcq, Geneviève has published a series of articles on trade and the environment, the first, second, third, fourth, and fifth of which are currently available. All her recent publications can be found here.

Geneviève Pons is a Knight of the Legion of Honour.