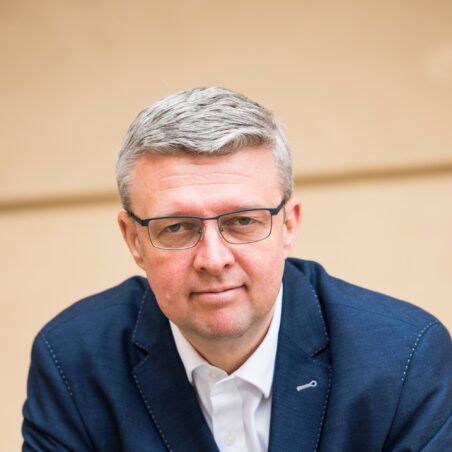 Since the turn of the millennium, he has been defending the interests of entrepreneurs, especially in the position of Chairman of the Board of Directors of the Association of Small and Medium-Sized Enterprises and Crafts of the Czech Republic. As co-owner and CEO of the SINDAT Group, he developed this company into a respected investor in the area of small and medium-sized industry and new technologies over the past twenty years.

He has been involved in the academic world for many years and, in recent years, has was associated with the University of Finance and Administration, where he built the Faculty of Economic Studies and prepared a study program Economy and Management. He has written several books on the subject of small and medium-sized enterprises and has published dozens of peer-reviewed articles in the Czech Republic and abroad.

He has been a member of a number of advisory bodies to the Government and Ministries; since 2014 he has been a member of the Government Council for Research, Development and Innovation and since 2018 he has been its Vice-Chairman. He is the lead author of the Government Innovation Strategy, called The Czech Republic: The Country For The Future.
In April 2019, Mr. Havlíček was nominated by the Prime Minister for the post of Deputy Prime Minister for Economic Affairs and Minister of Industry and Trade. On 30 April 2019, he was appointed to both positions by the President of the Czech Republic. At the same date, he resigned from the statutory and ownership positions in the business sector and left the management of the Association of Small and Medium Enterprises and Crafts of the CR. On 24 January 2020, Karel Havlíček was also appointed to the post of the Minister of Transport of the Czech Republic.