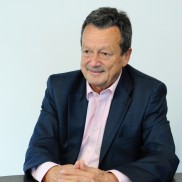 Founder and President of the Aspen Institute Central Europe

Ivan Hodáč is the Founder and President of the Aspen Institute Central Europe. He was Secretary-General of the European Automobile Manufacturers’ Association (ACEA) from 2001 until October 2013. He served,  among others, as a member of a special Advisory Group of experts, which was advising the European Commission in the negotiation of the Transatlantic Trade and Investment Partnership with the United States (TTIP), and as an advisor to the Czech Government on European issues. Ivan Hodáč is also a Senior Advisor at Teneo CabinetDN, a leading consultancy on the EU affairs. The Financial Times listed him among the most influential personalities in Brussels politics. Before joining ACEA, he was Senior Vice-President and Head of the Time Warner Corporate office for Europe. Previously he was Secretary-General of the trade organization IFMA/IMACE, Senior Economist at Didier & Associates, and Assistant Professor at the College of Europe, Bruges. He was born in Prague, where he studied mechanical engineering. Ivan Hodáč completed his education in economics and political science at the University of Copenhagen and the College of Europe in Bruges (European studies).