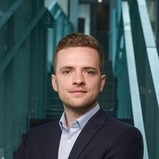 Jakub Dvorak is a Country Manager for Czech Republic at Bolt – third fastest growing company in Europe of both 2019 & 2020 according to Financial Times. After spending some time at Deloitte, he joined Bolt among first 50 employees globally back in 2016. Today Bolt is 1700 people big and Jakub is responsible for its Czech operations and the team of 50. He’s involved in public policy on city, government and NGO levels shaping the world of transportation towards greener future.

During the first wave of the pandemic he and his team introduced grocery package delivery within 24h after the lockdown was announced. When online supermarkets were collapsing and waiting times were in days, Bolt was able to deliver grocery packages within 15 min from ordering.

During the second wave Bolt has offered free rides to all medical staff in all Czech cities where Bolt operates in order to make their life at least a little easier.