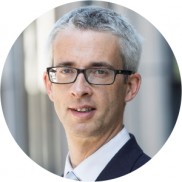 Director of Economics, BusinessEurope, the Confederation of European Business

James Watson was appointed Director of Economics at BUSINESSEUROPE, the Confederation of European Business, in June 2011. In this role he is responsible for developing and communicating the organisation’s positions on macroeconomic policies, structural and financial market reforms, economic governance, taxation, the EU budget and EU regional policies.

Prior to joining BUSINESSEUROPE, James worked for 14 years as an economic adviser in the UK Government’s Department for Business, Innovation and Skills (formerly DTI), providing economic advice and analysis on policies to raise the UK’s long-term growth rate. During this period he co-authored a number of research reports on subjects ranging from the role of highgrowth firms in the UK economy to the UK’s trade relationship with China and India. He has also worked on secondment to the Cabinet Office in the UK, at the Norwegian Ministry of Trade and Industry and the European Commission’s DG Economics and Financial Affairs.