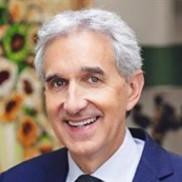 Jeffrey Gedmin is a Nonresident Senior Fellow for the Future Europe Initiative at the Atlantic Council. He is also a Senior Fellow at Georgetown University’s School of Foreign Service and a Senior Adviser at Blue Star Strategies. From 2011 to 2014, Gedmin was President and CEO of the London-based Legatum Institute. Prior to joining the Legatum Institute in early 2011, Gedmin served for four years as President and CEO of Radio Free Europe/Radio Liberty (RFE/RL) headquartered in Prague. Before RFE/RL, Gedmin served as President and CEO of the Aspen Institute in Berlin. Before that, he was a Resident Scholar at the American Enterprise Institute (AEI) in Washington, DC and Executive Director of the New Atlantic Initiative.

He is the author of several books, including The Hidden Hand: Gorbachev and the Collapse of East Germany (1992). Gedmin also served as co-executive producer for two major PBS documentaries: „The Germans, Portrait of a New Nation“ (1995), and „Spain’s 9/11 and the Challenge of Radical Islam in Europe“ (2007). He is a member of the Council on Foreign Relations and serves on several boards, including the Institute for State Effectiveness, the Kleptocracy Initiative (based at the Hudson Institute), the Center for Entrepreneurship and Development (part of the University of California Berkley), and the Georgetown University School of Foreign Service Masters Program.