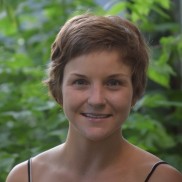 Theatre artist, Elected Board Member of the Democracy in Europe Movement 2025

Kasia Wojcik is studying at the Freie Universität Berlin and works for various independent theatre projects, focusing on the relationship between theatre and politics. She is part of the dramaturgical team of “The General Assembly” by the director Milo Rau and assisting in the Performing Arts Program Berlin. She has been an active member of the Democracy in Europe Movement 2025 (DiEM25) since its founding. She organized various events, workshops and lectures in collaboration with artists, academics and activists, building a network of progressive city and citizen initiatives, parties and movements in Berlin and beyond. Her main political interest is the strengthening of feminist and migrant voices in a Europe based on solidarity and equality.