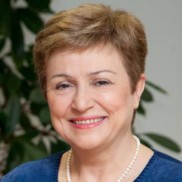 Kristalina Georgieva has an M. A. in Political Economy and Sociology and a PhD in Economic Science from the University of National and World Economy in Sofia, Bulgaria, where she was an Associate Professor between 1977 and 1991. She conducted post-graduate research at London School of Economics in 1987-88. In 1991, she went to the Massachusetts Institute of Technology as a Visiting Scholar in environmental policy, co-led a course on economies in transition, and consulted on environmental policy in Eastern Europe.

She is the current European Commission Vice-President. She negotiates and manages the EU budget, ensuring that it is invested in the best way to serve EU citizens. Prior to that function, Vice-President Georgieva was the Commissioner responsible for the EU’s International Cooperation, Humanitarian Aid and Crisis Response. During her term in office she oversaw the delivery of life saving assistance to nearly 500 million children, women and men affected by conflicts and natural disasters around the world. Before joining the European Commission in February 2010, she held a number of positions at the World Bank.