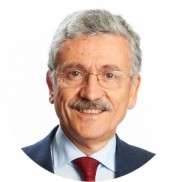 Massimo D’Alema’s political activites began in 1963 when he joined the Italian Young Communists‘ Federation (Federazione Giovanile Comunista Italiana, FGCI). In 1975 he was elected General Secretary of the organization, and held that post until 1980. In 1986, Massimo D’Alema became a member of the Secretariat of the Italian Communist Party (Partito comunista italiano, PCI), and in 1987 was elected member of the Italian Parliament (Camera dei deputati). In 1989, he was actively engaged in the process which transformed the Italian Communist Party into the Democratic Party of the Left (Partito democratico della sinistra, PDS).

In 1992 Mr. D’Alema became President of the PDS parliamentary group in the Chamber of Deputies. He was re-elected MP both in 1994 and 1996. In July 1994 he was elected General Secretary of the PDS. On 5 February 1997 Massimo D’Alema was elected Chair of the parliamentary Committee on Constitutional reform; on 4 November 1997 the Committee submitted to the two Houses of Parliament a draft reform of Part II of the Italian Constitution.

On October 1998 Mr. D’Alema became Prime Minister of Italy. He was in office until April 2000. In December 2000 he was elected President of the Democrats of the Left (Democratici di sinistra, DS). In October 2003, at the 22nd Congress of the Socialist International in Sao Paulo, Brazil, he was elected Vice-President of the S.I. In June 2004 Mr D’Alema became a Member of the European Parliament, where he held the position of Chair of the EP Delegation for relations between the EU and the Mercosur.

From January 2010 to March 2013 he has been the Chairman of COPASIR (Parliamentary Committee for the Security of the Republic), which is responsible for the Parliamentary control on intelligence services. He has also been the President of a political Foundation called „Fondazione di cultura politica Italianieuropei“ since 2000.

He was elected as the first President of FEPS on 30th June 2010.