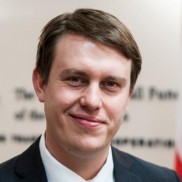 Michał Baranowski is the director of GMF’s Warsaw office, where he focuses on transatlantic relations, U.S. foreign policy, and the relations between the United States and Central and Eastern Europe (CEE). Prior to helping launch the Warsaw office, he served at GMF’s headquarters in Washington, DC, where he developed GMF’s programming in Poland and CEE. Before that posting, Baranowski worked in GMF’s Brussels office, where he focused on EU and U.S. policy toward Ukraine and Georgia, and where he also established the Young Transatlantic Network.

He has published in Gazeta Wyborcza, Rzeczpospolita, the Warsaw Business Journal, the Kyiv Post, and GMF’s Transatlantic Take series. He is a member of the Advisory Council of the Institute for Western Affairs in Poznań, Poland. He holds a masters of European public affairs from Maastricht University, and has studied at Mercer University in the United States and the University of Oxford.