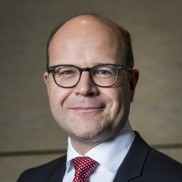 As the head of the State Chancellery, Mr Oliver Schenk aids the Minister-President determine policy regulations and is also responsible for media policy and media law in Saxony. As a State Minister he acts as the contact person for issues concerning the State territory and its subdivision, as well as general issues relating to the State administration and the authorities‘ structural organisation.

After completing his schooling, he studied Economics in Münster. Having graduated as an economist, Mr Oliver Schenk began his professional career in the Saxon civil service in 1994, initially at the State Ministry for the Environment and Regional Development. In 1999, he moved to the Ministry of Finance, initially as a speech writer and later as the Finance Minister’s chief clerk.

From 2002 to 2005, Mr Oliver Schenk was the chief clerk of Minister-President Georg Milbradt, and between 2005 and 2009, he was the head of the departments of Portfolio Co-ordination and Political Planning, Federal Affairs & International Affairs at the Saxon State Chancellery. Mr Schenk then moved to the Saxon State Ministry of the Interior as the head of the Administrative Upgrading and IT department.