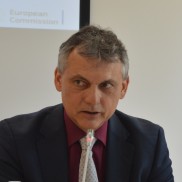 Petr Mooz has been the head of the Communication Unit of the Directorate-General for Budget (European Commission) from February 2011, where he also worked as the advisor to the Director General. Between 2005 and 2010, he worked in various managerial posts in the BSC Prague company. For 12 years, he was also part of the Czechoslovak (Czech) diplomacy, such as the director of the Department for Security Policy or a Deputy Director of the Czech Ambassador in Austria. He also worked in the international Secretariat of OSCE – The Organization for Security and Co-operation in Europe.