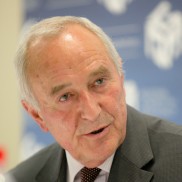 He joined the European commission in 1981, where he spent a large part of his career on EU enlargement: setting up the PHARE assistance programme; Head of relations with Poland, Estonia, Latvia, Lithuania; Director for the accession negotiations with Hungary, the Czech Republic, Slovakia and Slovenia, then for Croatia and Turkey. In 2006, he took over the relations with Albania, Bosnia and Herzegovina, Kosovo, Montenegro and Serbia, until he retired end 2013.