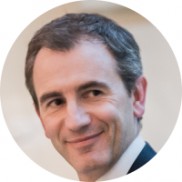 Thierry Chopin holds a PhD in political science from the the School for Advanced Studies in Social Sciences (EHESS, Paris). He is Head of Research at the Robert Schuman Foundation, a French Think-Tank on EU affairs based in Paris and Brussels. Thierry is currently Visiting Professor at the College of Europe (Bruges) and he also teaches at Sciences Po and at Mines ParisTech.

He has served, between 2007 and 2008, as scientific advisor to the Strategic Analysis Center (Policy Planning Staff of the French Prime Minister) and as advisor at the Policy Planning Staff of the French Ministry of Foreign Affairs. Thierry is currently an associate expert at the Center for International Studies of Sciences Po (CERI) and Visiting Fellow at the LSE’s European Institute.

He is the author of many books on European issues including (with Y. Bertoncini), Politique européenne. Etats, pouvoirs et citoyens de l’Union européenne (Presses de Sciences Po-Dalloz, 2010)   and (with Jean-François Jamet and Christian Lequesne) L’Europe d’après. En finir avec le pessimisme (Lignes de Repères, 2012). He is co-editor with Michel Foucher of Schuman Report on Europe. State of the Union.