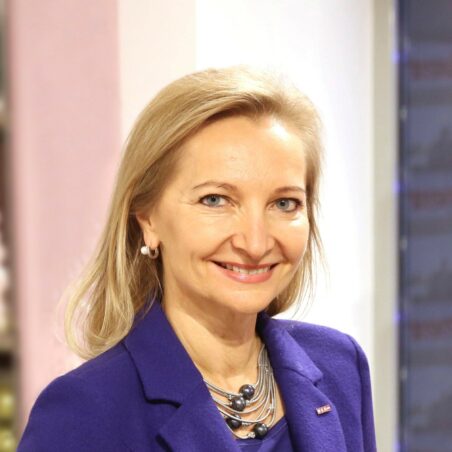 Ulrike Rabmer-Koller is the owner and CEO of “Rabmer Group” – an internationally operating company active in the fields of construction and environmental technology, such as trenchless pipe rehabilitation, water and wastewater technology and renewable energies. She has gathered extensive experience in international business development and in providing innovative solutions for climate protection.

She engages herself also on the European level. From 2016 – 2019, she served as President of SMEunited, representing 24 million SMEs in Europe. In this capacity, she also participated in the regular EU Social Partner Summits with the Head of the EU Commission and the EU Council. From 2011 until 2015, she was Vice-President of SMEunited and Chair of the Sustainable Development Committee. Since 2020, she is again active in these two functions. In June 2017, she attended the meeting of the G7 environment ministers in Bologna as EU representative and, together with other company representatives, worked out positions for better integration of ecology and economy. In December 2017, she was appointed to the High-Level Roundtable „Industry 2030“, where she developed proposals for the European Industry Strategy 2030 together with 19 other experts from across Europe. In 2018, she was nominated to represent the EU in the „G20 Business Women Leader Task Force“.