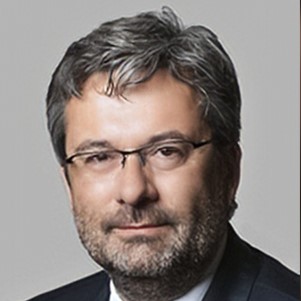 Mr Vladimír Bärtl graduated from the Czech Technical University in Prague with specialization in Geodesy and Cartography. In the period from 1989 to 1993 Mr Bärtl worked in Geodézie ČS, a.s. and gained professional experience in geographic information systems in Paris. He co-founded the firm HOUDEK s.r.o., focused on metrology and transfer of technologies. Mr Bärtl joined the Ministry of Foreign Affairs in 1999 and he worked at Czech Embassy in Ottawa from 2000 to 2004. After that he was adviser to the Vice Minister of Industry and Trade from 2004 to 2006 as co-author of Export Strategy 2006—2010 and of the project: „The new System of State Commercial and Economic Services Abroad“. He absolved a study focused on „Negotiation techniques in EU“ in 2005. Mr Bärtl worked at Czech Embassy in Paris from 2006 to 2010. He co-organized the „Czech and French Economic Year“ during the successive French and Czech Presidency in EU. He was a team member for the localization of the Galileo Managing Centre to Prague. After that in 2010 he was involved in commercial projects of the company BCM Control s.r.o., and successively in 2011 he acted as representative of the Minister of Industry and Trade for international commercial competitiveness and for promotion of Czech commercial interests abroad. Mr Bärtl was named Vice Minister of the Ministry of Industry and Trade as of 15th March 2014. He manages the Section of European Union and Foreign Trade. Mr Bärtl also likes to promote traditional Czech engineering products in an unconventional way – sometimes he flies Czech airplanes or drives Czech motorcycles during his official journeys.